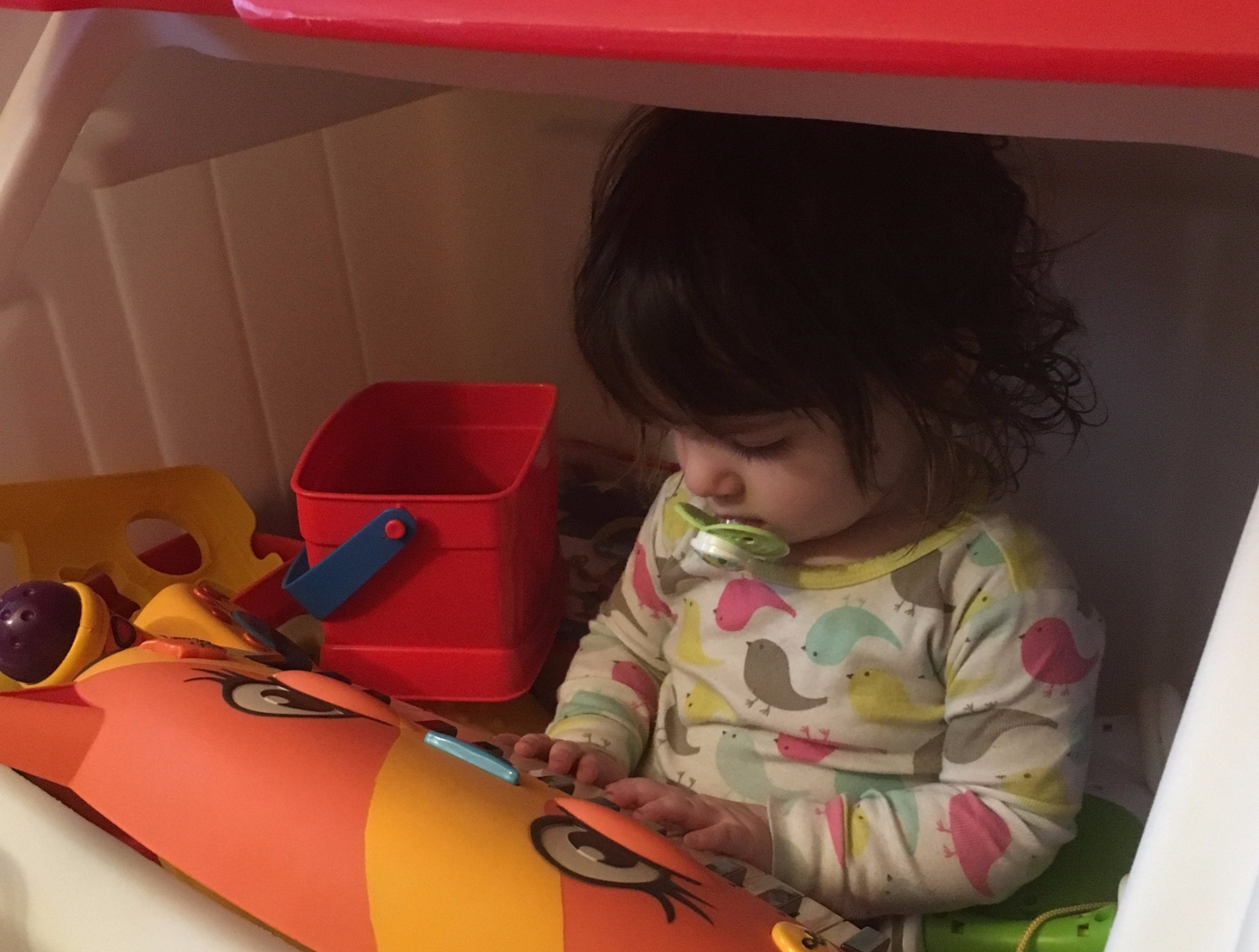 As a parent, I am sometimes overcome, and sometimes taken completely by surprise by it. One such time happened last week. I was at work, checking Facebook while my copies ran, reading a post my wife had made about our daughter eating a grilled cheese sandwich. Not just eating–actually chewing and swallowing. I didn’t expect the tears that welled in my eyes looking at the accompanying picture of my two kids standing at a large window overlooking the city of Baltimore. I suppose you wouldn’t either. Let me start a bit closer to the beginning.

This is my daughter. We’ll call her Li’l Boo (because I sometimes do). 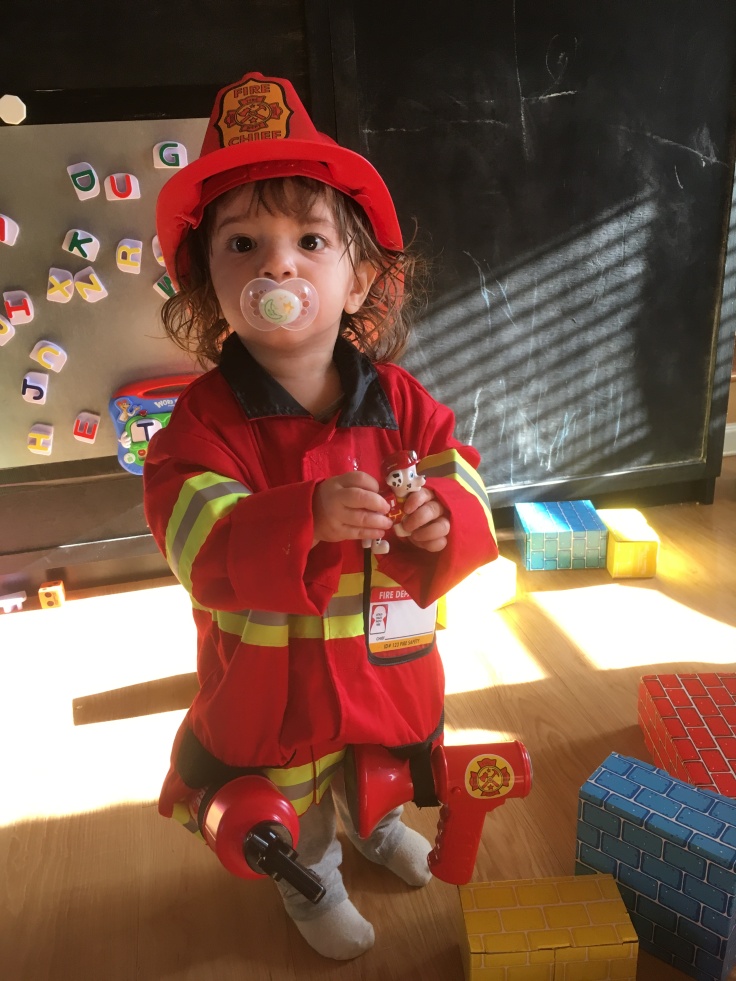 Just weeks shy of two years old, Li’l Boo likes to sing and dance, do yoga (seriously–it’s hilarious), climb anything and everything, read books, make music, and color.  Every day when I get home from work she runs to give me a hug. She’s a spirited, sweet, happy little girl.

But, as Antonio Banderas says at the beginning of The 13th Warrior, “Theengs were not always thus.”

For the first year of her life, I thought my daughter was a totally different kid. I wouldn’t say she was unhappy, but she was not in a hurry. Where her brother had been energetic and independent all his life, pushing away the offer of a helping hand as soon as he thought he could do something by himself, she seemed to like being babied and didn’t really try to do anything by herself. I joked that she was lazy, and said more seriously that it was good her brother was so independent, because she would likely just tag along, content but unenthusiastic, all her life.

For example, Li’l Boo didn’t seem terribly interested in crawling, but she got around to it eventually. Same thing with walking. Oh, and eating. She nursed well past her first birthday. Exclusively. Once, when she was very small, she drank from a bottle. My wife had a surgery and couldn’t nurse for a day, so it was a necessity. She was also too young, I think, to be indignant at the offer of an artificial nipple. After that, though, it never happened again. At about nine months, she started showing interest in the food we were eating, but she never actually took anything that was offered. We tried coaxing and tricks and all kinds of soft and pureed foods (didn’t help that she wasn’t in any hurry to grow teeth, either–she still has only two fully grown in). Approaching her first birthday, at a time when a child is supposed to be growing like a chubby, diaper-crapping weed, our baby was losing weight. Although she had been and remained alert and mentally quick, I worried that her brain development might be affected if we didn’t get her more nutrition.

At dinner two days before her first birthday, our picky baby opened up for some ice cream Grandma shared with her. She was actually eating something! So another spoonful followed, and then another and another. She was loving it, Grandma was loving it, and Dad was thinking, Great, so she’ll live off ice cream ‘til she’s two, or four, or eight…

And that’s when it turned to shit. The redness and itching started on her hands. She had been plagued with eczema most of her life, but this sudden change was new. Then she was rubbing her mouth, then her eyes. Her face reddened, then started swelling. We paid the check and left, stopping at a Walgreens to get Benadryl and struggling to get her to drink it from the medicine cup as she cried and struggled against the belts of her car seat. We got her home and into bed, and I laid on the floor next to her watching and listening for any change, any wheezing in her throat or other indication that the reaction was getting worse–or better.

My wife has an excellent blog article up here about how this discovery of Li’l Boo’s food allergies (we’re up to ten confirmed, including milk, peanuts, eggs, sesame, shrimp, crab, and cashews) changed our life, but that’s not really my focus here. Once we started cutting out allergens, my daughter became my daughter. The change was both immediate and gradual, as she clearly felt much better as soon as my wife cut dairy out of her diet, but it took some time for her to adjust to her new self and truly grow into her personality. One of the most gradual parts was the eating.

In the month following the ice cream incident, Li’l Boo did start eating. We had some help from a state-funded program in Kentucky and had gotten her eating a bit of baby food, mostly apples, and drinking a soy-based nutritional shake. Then we moved. We sold our house and left Kentucky, stopping for about six weeks at my in-laws small Jersey Shore beach house before moving into an apartment when I started work in Maryland, then moving into our house in October. Maybe, like me, she was stressed out. Maybe, like me, she was tired of trying new foods only to then wonder just what the hell was in it that caused this latest eczema breakout. Whatever the case, she stopped eating. For months, she lived pretty much entirely off of her nutritional shake. When she did start accepting offered food, she seemed unable to swallow solid food and would simply hold it in her mouth, maybe gum it a bit, then spit it out.

The journey from there to here has been long, slow, and stressful. But it has not been mine. A feeding therapist visited bi-weekly for a few months, and there were trips into Baltimore to the Kennedy Krieger Feeding Clinic each other week. Apple sauce became a staple food, then (soy) yogurt, then oatmeal. All of this happened while I was at work. And I say happened, but it didn’t just happen. It was coordinated, facilitated, overseen, managed, all by my wife, who also bore the brunt of planning and cooking allergy safe meals for the whole family every day, calling and emailing food manufacturers to ask about allergy safety, and avoiding allergen contact when she took the kids out to parks and playgrounds and libraries and music classes.

And then, on Tuesday, after a text message had already told me that Li’l Boo had been discharged from the Feeding Clinic, I read on Facebook that she had eaten–chewed and swallowed–an entire grilled (vegan) cheese sandwich. And I was overcome. Overcome with joy that my little girl was finally approaching something like normalcy. Overcome with love for my wife who made this magic happen while I was distracted with adjusting to a new job and new place. Overcome with shame that I had let other priorities keep me from being more involved–hell, more aware–as my child literally learned to eat.

I’m unsure how to wrap this up, except to say that we are still at the beginning of a long road, but it is one my Li’l Boo will sing, dance, and laugh all along. I hope you’ll stay with us some of the way.